Skip to sub-navigation Skip to main content Skip to footer 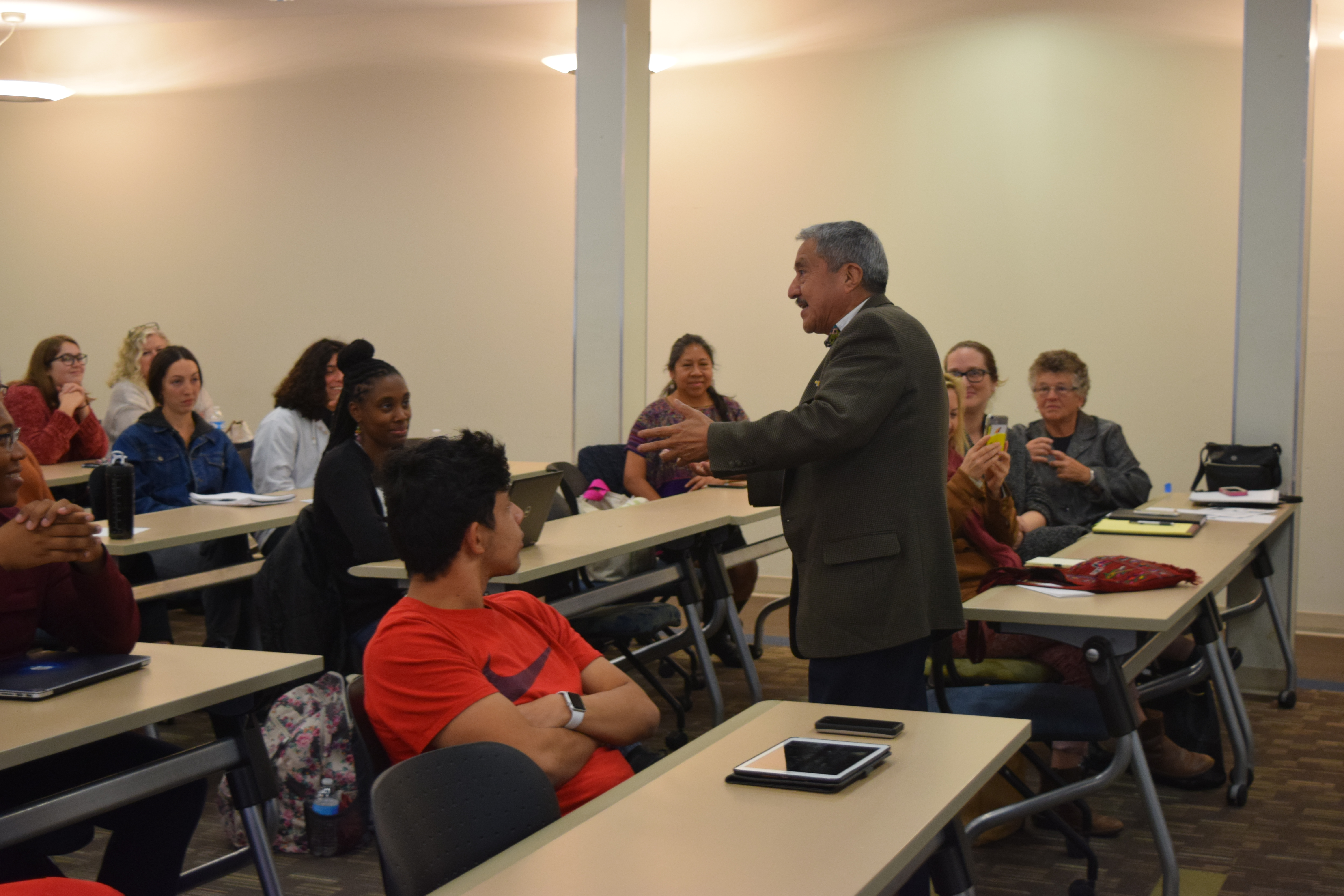 Students listen intently as Professor Sac speak about the plight of the indigenous migrators from Central America.

Richmond, Va. (Oct. 29, 2018) — No truer words than “perfect timing” could be used to describe the recent visit of Professor Audelino Sac Coyoy to Virginia Commonwealth University. Professor Sac is a Maya-K’iche’ political scientist who currently teaches at the Universidad Rafael Landívar Campus de Quetzaltenango in Guatemala. The lecture, co-sponsored by the Highland Support Project, VCU Institute for Women’s Health and VCU Department of Political Science, and hosted by the Global Education Office, coincided with the real-time migrant caravan marching from Central America to the United States. Professor Sac spoke to VCU students, faculty and staff on “Social and political forces pushing immigration of Indigenous people to the U.S.”

The timeliness of the lecture gave the audience a unique opportunity to learn about and discuss specific facets of the economic and political crisis provoking indigenous migration from Central America.

Having served as an elected delegate on the Guatemalan government committee for the Definition of Indigenous Sacred Places, Agreements and Process of Peace in Guatemala, Sac offered a wealth of knowledge to those eager to understand the plight of his country’s migrants, as well as insights into the political system. 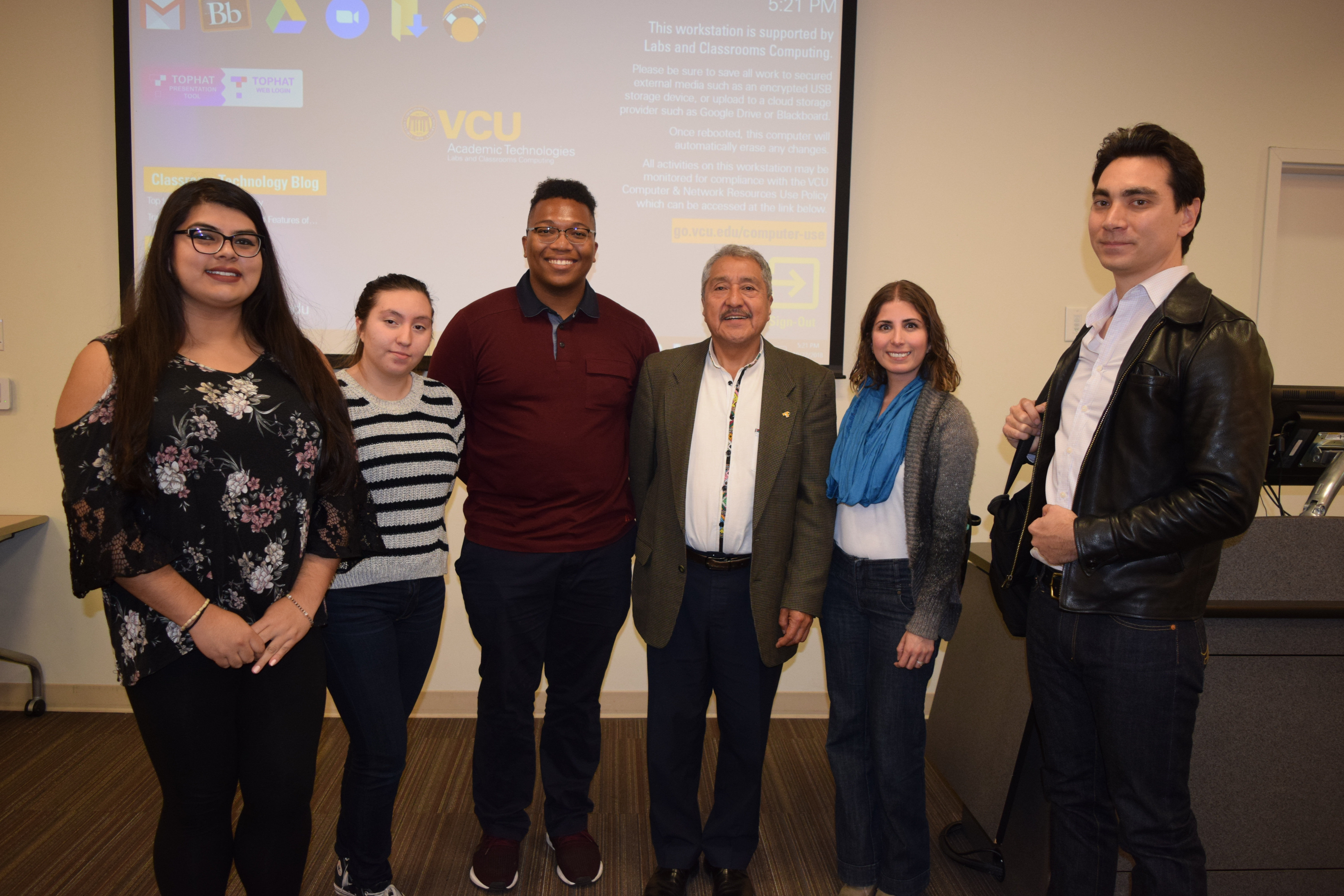 Professor Sac (fourth from left) with VCU faculty and students.

“With many years of consulting and program direction for the United Nations and other agencies, Professor Sac is a valuable voice to be heard in today’s political climate,” said Jill Blondin, Ph.D., interim director of the Global Education Office, who introduced him to the group of about sixty VCU students, faculty and staff.

Discussing the topic of migration, Sac presented the main question that asks ‘Why are people leaving their land to find new homes?’ “It is because those that have the responsibility for ensuring that people live well are not fulfilling their obligations,” he said.

Sac explained the concept of development and its specific meaning for the Mayan way of life.

Sac provided further detail about the Mayan theory. “What is development for us? It is to live well physically and spiritually in the place where you have been destined to live, so that you do not have to walk to the United States in order to have a good life,” he said.

To understand the Mayan philosophy of living physically and spiritually well, Sac explained, one must review and study the Mayan Cosmo-vision or worldview. This philosophy presents the concept that “to be healthy means to be content in one’s heart,” he said.

“They come with dreams and hopes for the well-being of their families, and to live a dignified, honorable life in this country.”

“One simplistic way of understanding this term ‘development’ is that one moves from a place of economic scarcity to one of having more material wealth,” he explained. “Maybe that concept is very useful for many different people, but our Mayan definition of development is a little different than this materialistic definition.”

Sac described how adherence to culture and ideas of self-worth for the Mayan people is based on the support of the government. He explained that there are four different cultures and ethnicities recognized as part of the Guatemala state. Guatemala is located in a region that is called Meso America, and in this region, the Mayan culture flourishes.

Sac discussed how the Mayan culture has been increasingly lost, however, due to enforcement of new values and beliefs by the state. “So many people in Guatemala have been wounded by the state because the state has not been thinking about how to reinforce cultural values. So, from the configuration of the Guatemalan state, the state says that Mayan culture is irrelevant and not useful. It doesn't serve any purpose. And the state has expected people to live differently from their natural cultural state, with different beliefs,” he said.

According to Sac, this shift in retaining and supporting Maya cultural values has caused dire consequences for the people in particular varying stages of poverty.

“This has led large sectors of the population to live in poverty,” he explained. “The people do not have health care, education or housing.” 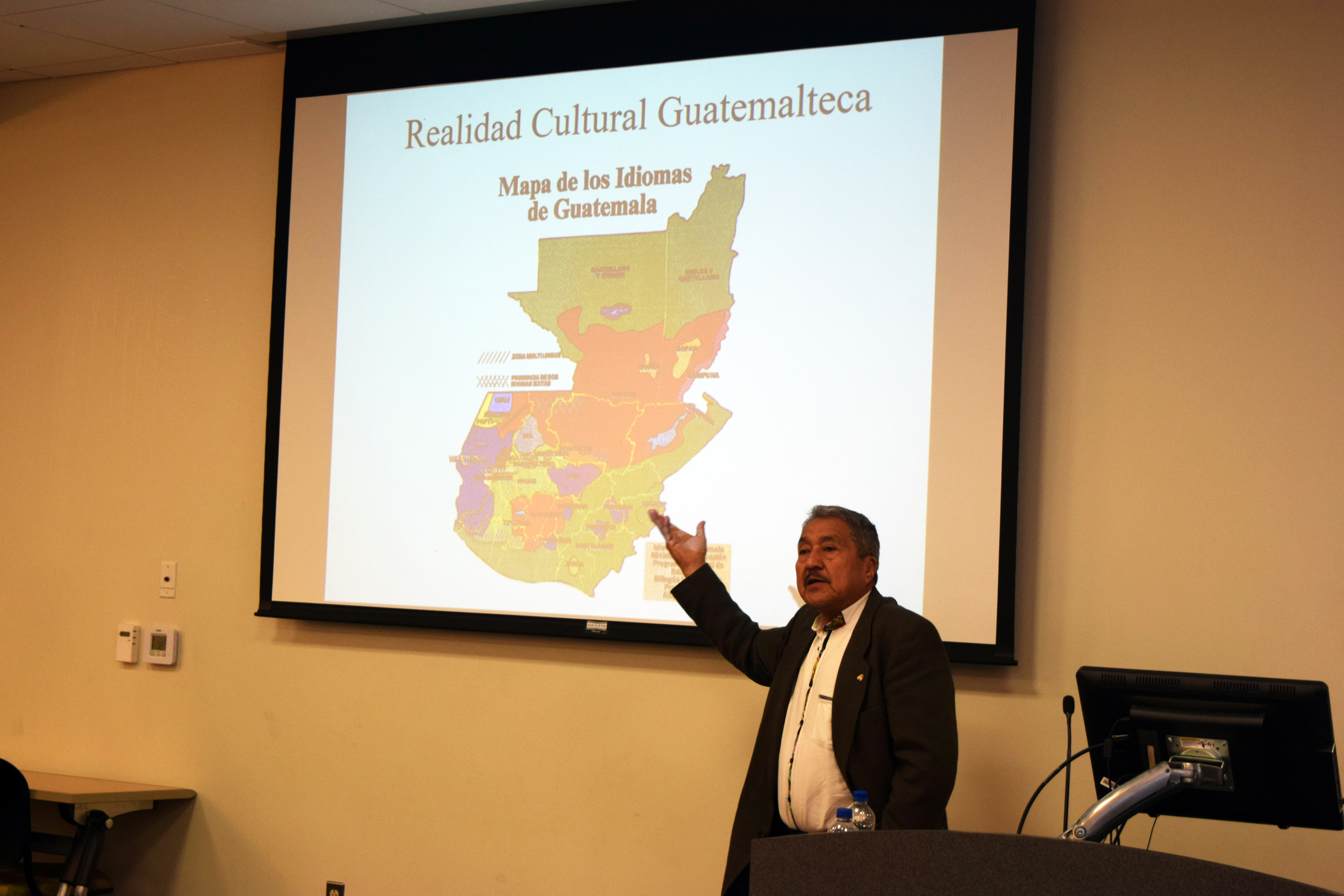 Professor Sac refers to a map depicting the varying languages throughout Guatemala.

Focusing on the need for proper governmental support for citizens, Sac argued that eradicating poverty is not a charitable act that government should take, but that it is the responsibility of the government.

Referring to a table showing the 22 different states in Guatemala and the statistics about ‘extreme poverty’, ‘poverty’, and ‘no poverty’ in those regions, Sac further explained migration. “In this table, the states that have the highest concentrations of extreme poverty correspond with the indigenous population concentration. So now we can see to some degree why indigenous people are migrating.”

Despite the pervasive belief currently existing among people throughout Latin America, that to give their families a dignified life they must march to the United States, Sac feels that this migration is perceived differently in the U.S.

“There's a belief that only people from gangs and criminal bands are coming to the United States from Central America. I'm sure some do come, but the vast majority is people looking for a better life,” he said.

“It doesn't matter how many walls or laws are imposed; the people are going to continue to come to this country where it is said that the American dream has been built,” he said.

Dismissing the idea that Latin Americans do not come to the United State to help make it better, Sac offered, “they come with dreams and hopes for the well-being of their families, and to live a dignified, honorable life in this country.”

Sac also lauded those who have had the opportunity to travel with the Highland Support Project to gain a direct connection with Mayan culture. To him, it is a chance to appreciate this different culture that exists among the many others in the world.

“The people who love this culture deserve to be able to live well, happy and content in the body and heart in the place they were destined to live. And wouldn’t it be wonderful if one day we did not continue to need to immigrate to the United States?”